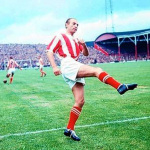 Joseph Edwards & Sons are proud and honoured to have been asked to take care of the funeral arrangements for Sir Stanley Matthews’ funeral. The funeral took place on Friday 3rd March 2000 at St. Peter’s Church in Stoke.

The cortege consisting of nine vehicles with police escorts started from The Britannia Stadium and made its way through Stoke on Trent on a 14.2 mile trip to the church. This one and a half hour trip was watched by over 100,000 people lining the streets and millions more as the trip and funeral was beamed live around the world.

Stoke City chairman Peter Coates said “He was a unique football and sporting legend. He put Stoke City Football Club on the map and kept us here for three generations more. No club had a greater ambassador. Attending a function with him was like going out with royalty, we got the red carpet treatment. He was friendly, modest, self-effacing and never criticised players. He was highly intelligent and was a shrewd judge. This city had master potter Josiah Wedgwood, literary figure Arnold Bennett, Victorian Scientist Oliver Lodge and Spitfire designer Reginald Mitchell. But nobody played the same part in the lives of people in this city as Stan. He was a working class hero.”

Speaking on behalf of the English Football Association, one of Sir Stan’s former team mates Jimmy Armfield said “Boxing was taken forward by Joe Lewis, tennis by Fred Perry and football by Stan. He was a true great with humility. He was a man who could reach for the stars and keep his feet on the ground. He was a role model for everyone. I never once saw him out of breath at a football match. He was often kicked and fouled but he never retaliated. Despite his global fame, he was very much a man of the people.”

This was followed by a speech by chief executive of the PFA Gordon Taylor, but the most moving sentiments were of Sir Stan the person spoken by grandson Matthew Gough.

He said “He will always be remembered as a footballer, but more than that he will be remembered by us and the people who knew him closely as a truly wonderful and emotional man.

Mr Gough read the poem ‘If’ by Rudyard Kipling which Sir Stan had given him a copy when he was younger. Following the service a private cremation was held at Bradwell Crematorium. Sir Stan’s ashes were later buried at The Britannia Stadium.

A report in The Guardian newspaper, claimed that the funeral was, after royalty and Sir Winston Churchill, the biggest funeral the country has seen.